Paul Edward Draper (born 26 September 1970 in Liverpool) is an English singer-songwriter, musician and record producer, formerly the frontman of the rock band Mansun.

February 1997 saw the release of the band’s critically acclaimed debut album Attack of the Grey Lantern. Although the band had finished recording most of the album prior to Rathbone joining, they went back into the studio to record new songs “Taxloss” and “Mansun’s Only Love Song” and re-record several drum tracks. The album appeared to contain a conceptual storyline, which Draper referred to as “small town weirdo observations” and was influenced by comedies The Goon Show and Monty Python, whilst ending with a hidden track, “An Open Letter To The Lyrical Trainspotter”, proclaiming (reportedly sarcastically) that “the lyrics aren’t supposed to mean that much”. The album knocked label mates Blur’s self-titled album from the top spot of the UK album chart after only being released the week before.

During the early days of the band, Mansun were noted and sometimes derided for their constantly changing fashion styles. Such styles ranged from punk, new romantic, baggy “Madchester” clothes, army fatigues, A Clockwork Orange style boiler suits and even women’s clothing. Draper admitted that it was “probably over enthusiasm, seeing people like Bowie’s different guises and thinking, ‘Great! Let’s try that.'”

In October 2013, Draper stated that he was considering releasing material from his abandoned unrecorded solo album “Spooky Action At A Distance” which only existed in demo form, if there was enough interest. After a petition was set up on Facebook, he responded that he was going to give the idea of releasing solo material some “very serious consideration”.

On 5 May 2014, the debut single “What Goes Around” by The Anchoress was released. A collaboration between Draper and singer-songwriter Catherine AD (Catherine Anne Davies), the duo have recorded an albums worth of material with Draper having co-written several of the songs and co-produced the whole album. A follow up to the single is due for release on 20 October in the form of EP “One For Sorrow”. In 2017, Davies reciprocally co-wrote 5 tracks on Draper’s solo album Spooky Action.

Draper’s first solo song “Feeling My Heart Run Slow” was premiered at a Mansun convention held at The Live Rooms in Chester on 23 August 2014. Recorded especially to play at the convention, Draper with the help of musicians from The Anchoress sessions, recorded five songs from his unrecorded solo album with a view to completing a whole album’s worth.

Draper announced his first solo single would be released via monthly subscription service ‘The Too Pure Singles Club’ in April 2016. It was announced that the official release of his EP One would be on Kscope on 10 June 2016. On 25 November 2016, Draper released EP Two. His full length album, Spooky Action, was released on 11 August 2017.

I met Paul back in 2008 after a 2 year email chat that seemed to last a lifetime. The reason being, he was my musical hero and I really wanted to work with him. After an initial audition at Stanley House in his production room he asked me to work with him.

We started demoing some tracks for The Anchoress in 2010 and work began on the album in 2011. This fantastically mushroomed into recording Pauls solo album ‘spooky action’ between 2013 and its release in 2017. 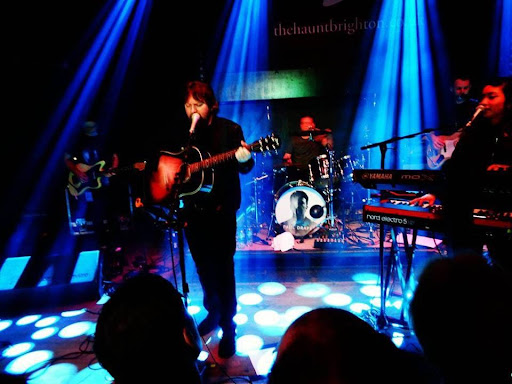 I have worked with Jon as my go to drummer on numerous recording projects and live tours for 5 years now. Prior to working with Jon I had worked with a verity of drummers until Jon auditioned for a record I was producing and I’ve never used another drummer since. We have toured together with Jon in my solo band and we have worked together on the award winning ‘Confessions of a Romance Novelist’ album by The Anchoress as well as my Top 20 debut solo album Spooky Action. Jon plays all drums on both these records. Jon is currently working with me on my second solo album and his skill and professionalism are invaluable as previous projects. Jon is pivotal to my live band. I can’t recommend him highly enough for both his technical ability as a drummer and also for him being a great person and valued member of my musical team.
Paul Draper
Call me